Southeast Montana was no stranger to conflicts between warrior tribes and U.S. Cavalry. Drive this loop, which includes U.S. Highway 212, also known as the Warrior Trail, to follow in the footsteps of these warring nations and learn how broken treaties, competing goals and human nature led to all-out war on the Montana prairie.

If you are a true history buff, follow the Trail to the Little Bighorn, a series of 19 roadside markers telling the story of events leading up to and immediately following the Battle of Little Bighorn. You will follow dirt roads and traverse the same rolling prairies that the 7th Cavalry did more than 100 years ago. Download the map here. 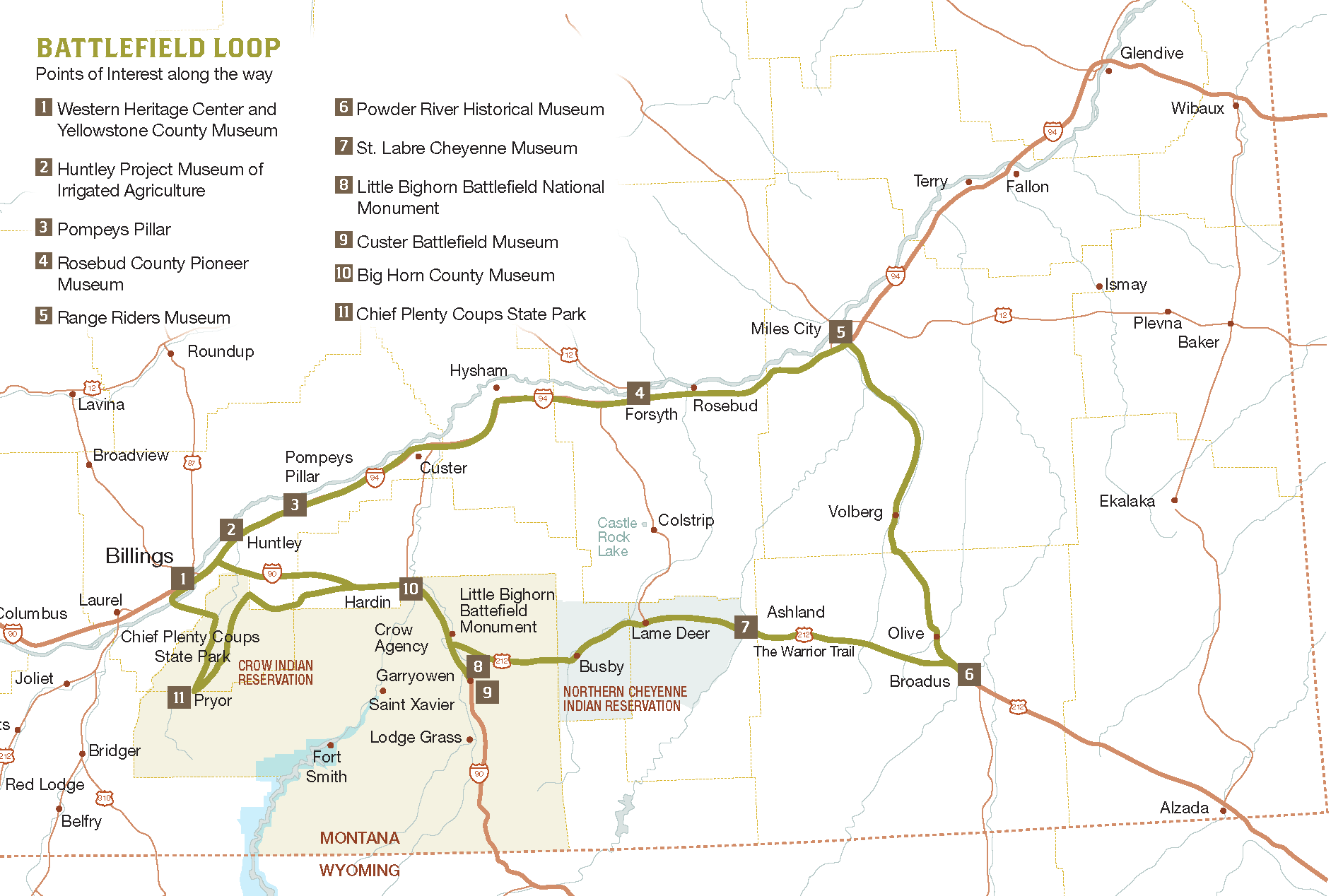 A great place to begin your journey, the Western Heritage Center and the Yellowstone County Museum will help get you oriented and paint the picture of how conflicts with the Plains Indians began.

This sandstone pillar, known by tribes as “the place where the mountain lion lies,” served as a meeting place for centuries. William Clark of the Lewis and Clark Expedition carved his name in the stone, right next to Indian petroglyphs carved there much earlier. See the site where Lt. Col. George A. Custer camped while leading a gold-hunting expedition years later.

The saga continues with the establishment of Fort Keogh. Learn about the fort and its role in the Indian Wars at the Range Riders Museum in Miles City.

Get the American Indian perspective at the St. Labre Cheyenne Museum in Ashland. Learn about the culture of the Crow and Cheyenne tribes and how they continue to honor the traditions of their ancestors today.

Grab a bite with locals at the Custer Battlefield Trading Post and Café—try a bison burger or Indian taco, made on traditional fry bread. Be sure to browse the wide selection of gifts and artisans work here or at Medicine Turtle and River Crow Trading Posts for handcrafted souvenirs.

In the heart of Crow Country at Crow Agency is the site that marked the climax of the Indian Wars. See where Lt. Col. Custer attacked a superior force of Sioux and Cheyenne and saw more than 200 of his men killed. Battlefield tours from the National Park Service or a personal guide tell the full story of this world-famous battle.

Learn about the rise and fall of Fort Custer at the Big Horn County Museum. With extensive exhibits, including many original buildings, learn about the tireless efforts of Europeans and American Indians alike who worked to homestead the wild prairie and build a life for themselves in the wake of the Indian Wars.

Finish your journey with a stop at this farmstead that Chief Plenty Coups, the last traditional Crow chief and visionary, left as a place for all cultures to come together in peace. First a warrior then a farmer, Chief Plenty Coups lead the transition of the Apsáalooke people from the “buffalo days” into the 20th century.